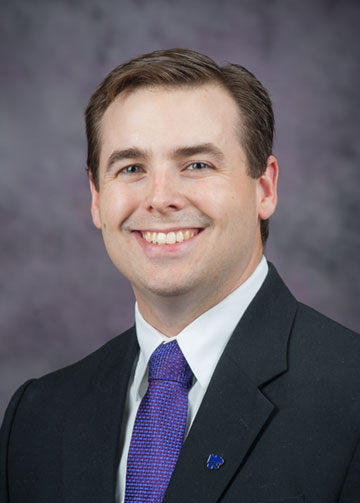 "Travis is a well deserving recipient of this recognition from AMSA," says Dr. Mike Day, K-State ASI department head. "The award recognizes an impressive program of research and technology in meat science. Recognition for this aspect of his program is even more notable as one considers it was attained in concert with excellence in teaching and coaching the K-State Meat Judging Team. Congratulations to Travis and a sincere thank you for the leadership and service he provides the ASI Meat Science program."

Originally from League City, Texas, O'Quinn received his bachelor's and master's degrees in animal science from Texas Tech University. Then went on to receive his doctorate in meat science from Colorado State University. Following graduation, he returned to Texas Tech University as a senior research associate. In 2014, he joined the KSU ASI faculty in a research and extension role, which has now transitioned to primarily teaching and research.

O'Quinn's research has played an important role in the meat science industry today. He has been the author or co-author of 49 peer-reviewed journal articles and 97 research abstracts presented at regional, national and international meetings. His research primarily focuses on beef eating quality and the factors impacting beef tenderness, juiciness, and flavor and how these all impact the consumers overall eating experience. He has hosted numerous workshops that involved educating grill masters of all different levels more about the science behind grilling and smoking different types of meat products.

Additionally, O'Quinn serves as the faculty sponsor and head coach of the K-State Meat Judging Team and co-coaches the Meat Animal Evaluation Team. Both teams have had tremendous success under his leadership. The Meat Judging teams has placed first or second at more than 75 percent of the national contests in which they have competed. In addition, O'Quinn has oversight of the state's youth meat judging program and worked diligently to increase participation in these events since his arrival at K-State, serving as the host-site coordinator for the National 4-H Meat Judging Contest since 2014.

As the state Meat Extension Specialist from 2014 to 2017, O'Quinn focused on consumer education programming on fresh meat utilization, quality, safety and production. He hosted a number of workshops including the very popular "Barbecue 101" program that taught grill masters of all experience levels more about the science behind grilling and smoking. Additionally, he published 36 extension fact sheets and research reports including a series focused on the types and number of retail cuts consumers could expect from beef, pork, and lamb carcasses when custom processed by small packers. In his extension role, O'Quinn gave 55 extension presentations and was interviewed for more than 47 different print, video, and radio news stories with a total reach of more than 3 million viewers/listeners.

O'Quinn is an active professional member of AMSA and has served on a number of committees including the Undergraduate Quiz Bowl Committee, serving as the chair in 2016, the Undergraduate Scholastic Achievement Award Selection Committee, and currently serves as the chair of the AMSA 4-H Meat Judging Advisory Committee. He has also been an active member of the AMSA Intercollegiate Meat Judging Coaches Association since 2009.