The KSU Horse Judging Team competes annually at the nation's most prestigious collegiate contests. These include the AQHA World Show, the All-American Quarter Horse Congress, and the APHA Spring Sweepstakes. The K-State team competes - and wins - at the highest levels of competition. The 2019 K-State team won both the APHA and AQHA World Champion Collegiate contests, the only team in history to ever achieve both accomplishments. The 1999, 2007, 2010 and 2019 K-State horse judging teams were all named World Champion Teams overall at the AQHA World Show, with the 2008 team being named Reserve World Champions overall.

Each team member has just one year of eligibility to compete, so students will begin their horse judging career at KSU in the spring and finish up with the major contests in the fall. Those interested in competing on the KSU horse judging team should enroll in ASI 325 Beginning Equine Evaluation in the spring of the year in which they wish to compete. They should then enroll in ASI 326 Advanced Equine Evaluation in the fall. Previous horse judging experience is not required - just a good work ethic and a desire to compete! The team practices on Tuesday and Thursday evenings with some weekend workouts. Most travel expenses are covered by funding through the Student Governing Association, so there is not extensive financial commitment required of team members. Those interested should contact Dr. James Lattimer. 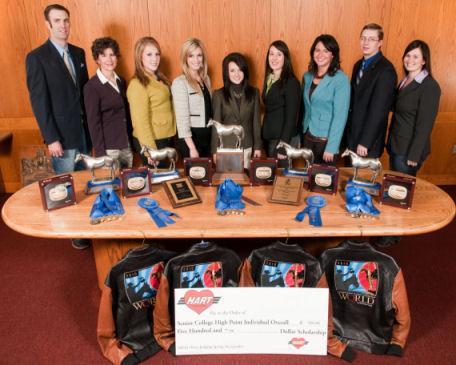