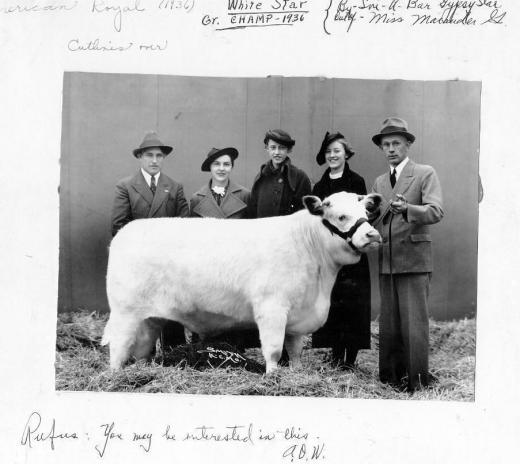 The Department of Animal Sciences and Industry has a long and rich heritage. From the down-to-earth animal husbandry group that emerged from the Farming Department in the early 1900's, to its current form as one of the largest Animal Science departments in the United States, K-State animal science has held fast to its commitment to excellence in teaching, research, and extension.

In celebration of more than 100 years of excellence in Animal Science, Professor Miles McKee has prepared the following overview of the department's history.

We hope you enjoy it!

History of the Department

On February 9, 1858, a group of early Manhattan settlers received a charter from the legislative assembly of the Territory of Kansas for the formation of the Bluemont College Association. A cornerstone for a class room was laid May 10, 1859, and classes started January 9, 1860. Apparently, finances became a problem and the Association offered to donate to the State of Kansas “- - our College Building, Library, and apparatus, together with one hundred and twenty (120) acres, more or less, of land contiguous, as a College site.” On February 19, 1863, the provisions of the Morrill Act were accepted and the Kansas State Agricultural College was established on the site of Bluemont College at the northwest corner Claflin Road and College Avenue. This was the first Land Grant School Chartered in the United States. Instruction at the College began September 2, 1863, with 52 students. 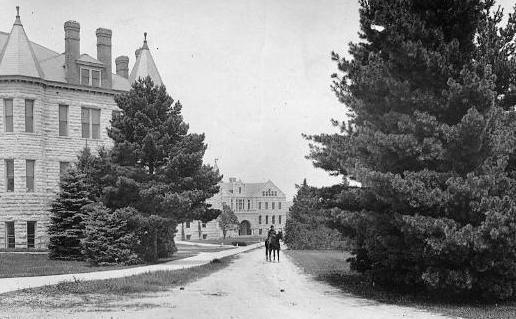 In April of 1871, the township of Manhattan, fearful that the State University at Lawrence was trying to take over the Agricultural College and make it a department of the University, voted $12,000 in bonds for the purchase of additional land for the farm. This bond money and some legislative appropriations from 1870 were used by the Regents to purchase an additional 315 acres of land for the college. Included in the purchase was 155 acres adjoining the town site of Manhattan which was approximately one mile east of the existing college. This acreage, known as the new campus, comprises most of today’s campus.

The legislature of 1872 appropriated $15,000 “- - to fence, improve and stock the state farm, and to develop the agricultural department of said college”. Of this amount, $5,000 was set aside for the construction of a barn, the first building on the new campus.

The records of the June 4, 1873, Board of Regents state, “Major Miller was authorized to purchase four head of three-year-old steers at five cents”. These steers probably were used for research as reported in the Eleventh Annual Report, issued in 1873, which states, “Experiments were conducted in feeding of cattle and the relative value of our native grasses for the purpose tested”. The Fifth Biennial Report covering the years1885 and 1886 reported that experimental work during the period tested corn meal versus corn-and-cob meal for beef making, corn-and-cob meal for fattening pigs, cooked versus raw corn for fattening pigs, pork production from one-half acre of alfalfa pasture, and the effect of cold versus warm water for milk cows. The next Biennial Report contained the following: “During the first week in September eighteen tons of sorghum were cut into inch length and packed away in the silo for use in the condition of ‘ensilage’. Late in January the silo was opened, and the great mass of its contents found to be in good condition. The ensilage seemed to be relished by the stock, with few exceptions, and its consumption was attended with but little waste. Of course, no satisfactory conclusion can be drawn from a single, very limited trial, such as we were able to give ensilage last year. This fact, however, was very apparent from the first: that capital required for machinery, men and teams, in making ensilage, puts the system quite out of the reach of farmers in general”. 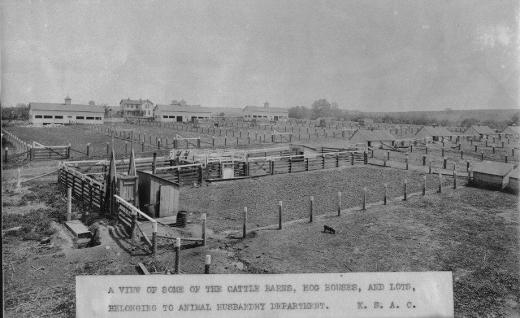 The first purebred breeding animals purchased for the farm were selected by Regent J. K. Hudson and Major Miller in 1873 and included cattle, swine and poultry. In September 1873 an additional “- - $2,210 appropriated for purchase of additional breeds of swine, cattle and poultry and the necessary outbuildings for them”.

The day before commencement in1886, the college held a public sale of stock. “The attendance was very large, the feeling excellent, and the bidding often spirited”. Eight Shorthorn cows and heifers averaged $134.37, seven yearling bulls averaged $117.14 and four Jersey cows averaged $96.25. Professor Shelton, the Professor of Agriculture, was convinced the surplus stock should be sold in that way.

Final approval for the establishment of the Agriculture Experiment Station, using federal funds, was February 8, 1888. However, it should be pointed out that the college had been doing research for 20 years before the federal funds became available.

In 1897, following several deaths from tuberculosis in the cattle herds over the last 20 years, the Regents voted to have the entire herd tested with the newly discovered tuberculin. Confidence in the tuberculin test was low and very time consuming. All cattle were confined to the barn and their temperature taken every hour for three days before the injection of the tuberculin and every hour for three days following the injection. Fifteen reactors to the tuberculin were identified. They were subsequently driven into a trench, shot and a public post mortem conducted. All fifteen were full of tuberculosis lesions. The remaining purebred cattle, sheep, and hogs were sold one month later. The College was without purebred livestock until 1901 when the State Senate voted $10,000 to purchase cattle.

The first competitive judging team to represent the College was a livestock team which judged at the International Livestock Show, held in Chicago, in November of 1903. Team members, coached by R J Kinzer, were C G Elling, Nick Schmitz, R S Wilson, R N Dorman and E C Gardner. First marking had the Kansas team winning but six weeks latter it was announced that on a remarking the team representing Iowa State had won the contest. At present, the Department sponsors seven judging teams. These teams and the year they first competed are: Livestock 1903, Dairy Cattle 1908, Poultry 1921, Dairy Products 1926, Meats 1927, Wool 1950, and Horse 1980.

The first Farmers’ Institute was held in Manhattan in conjunction with the Union Agricultural Society of Manhattan on November 14, 1868. Institutes were held annually until 1874 when one of the speakers was critical of President Anderson. Annual Institutes were started again in 1880. Starting in 1881 Institutes were held in other sites as well as Manhattan. These “traveling” presentations were very popular and reached a high point during the 1900-01 school year when 156 were held. In 1906 these meetings were referred to as State Farmers Institutes. In 1915 the name changed to Farm and Home Week and was attended by both men and women. During the week the different departments in Agriculture and Home Economics had a specific day to make their presentations. We do know that in 1919 the Animal Husbandry presentations were known as Livestock Feeders’ Day. At some time Farm and Home Week ceased to exist but Livestock Feeders’ Day continued. In the beginning discussions related to beef cattle, horses, sheep and swine although over time the various species groups started hosting their own species day. The beef cattle day became known as Feeders’ Day. In 1973 Feeders’ Day became Cattleman’s day and was moved from May to the first Friday in March, a date that has continued.

The Agriculture departments were first housed in Anderson, moved to Fairchild in1894 and to Holton in 1900. The Animal Husbandry Department moved to the east wing of Waters Hall in 1913 and to Weber Hall in 1957, which, with Call Hall, is the present home of the Department of Animal Sciences and Industry.

Live radio broadcasts from the College were started February 11, 1924, through an arrangement with KFKB, a 5000 watt station at Milford, Kansas, which was owned by Dr. J R Brinkley. The program, known as “The College of the Air”, offered five different courses one of which was a course in livestock and dairy taught by members of the department. Students would enroll, ten weeks later take a test over the material presented and, if receiving a satisfactory grade, were given a certificate of graduation. Because the station was so powerful, students enrolled from almost every state and Canada.

In 1947 President Milton S Eisenhower requested funds from the state legislature to develop an artificial breeding program in Kansas for dairy cows. Land, housing and bulls had to be secured. On January 2, 1950, the Kansas Artificial Breeding Unit, designed to serve the dairy industry, opened for business on land that was part of the original Bluemont College. Over the years, the unit, better known as KABSU, began to also service the beef industry. With the merger of departments in 1977 the unit became a part of the Department of Animal Sciences and Industry. Today the unit is housed on Tuttle Creek Boulevard.

A tornado ravaged several of the barns and sheds used by the department on June 6, 1966. A group of concerned individuals formed the Livestock and Meat Industry Council, LMIC, designed to raise money and give industry support for the rebuilding of the facilities, future research projects, and other needs of the department. In 1971, this group sponsored a Stockman’s’ Dinner the evening prior to Livestock Feeders’ Day at which Rufus Cox, former head of the department, was honored. No dinner was held in 1972 but since 1973 it has been an annual event. Starting with the 1975 dinner an individual, couple or family who has made a significant contribution to the livestock and meat industry has been honored.

The Livestock and Meats Industry Program, more commonly known as IMLP, was started in 1986 with funds provided by the state legislature. The charge was to help sell Kansas livestock and livestock products abroad and to help other countries with their livestock and meat production. Bill Able, the first director, traveled extensively the first year with visits to Asia, South America and Mexico where he visited with government, business and industry leaders about the new program and its’ availability. Short courses have been offered on campus for international students covering such areas as livestock production, meat and meat products, dairy herd management and product manufacturing, artificial insemination, embryo transfer, horse breeding or any other related area requested by a country.

Today, the Department of Animal Sciences and Industry maintains purebred and commercial cattle, sheep, hogs, horses and poultry. These animals are used for teaching and for research. In addition to Cattlemen’s Day there is also a Swine Day, a Sheep Day and a Dairy Day. The latest research information is presented at these meetings.