In August of 1946, Kansas State College pursued the acquisition of 1,134 acres for research in grass utilization and pasture management. Two months later, Kansas State College made the purchase. Dr. A.G. Pickett, Department of Animal Husbandry, was transferred from his position as assistant professor of Agricultural Economics in the division of Extension to head the project. Pickett worked on the Grass Utilization and Pasture Management Experiments for four years before.

Since (K-State Archives, Board Meeting Minutes ) its transfer to the College in 1950. The land has been used for many different types of research. Dr. Ed Smith started working at the Unit in 1947 and he did a great deal of the research at the unit until around 1985. The relationship between grass and cattle was the main subject of Dr. Smith’s research. After publishing over 225 scientific publications and research reports, Dr. Smith’s findings changed the face of agriculture in Kansas. 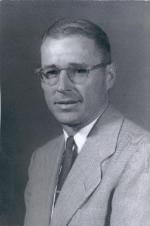 Some of the research at the Unit indicated that late spring burning can be beneficial in the bluestem pasture region. Pasture burning can prevent growth of woody species and increase the weight gain per animal. Another study showed that steers gained the most when grazed on a burned pastures with between 0 and 40 pounds a of nitrogen per acre. Dr. Smith’s research also shows that stocking pastures at twice the normal rate early in the growing season, then removing the stock off mid-season allowed for the same amount of grass production with increasing density of favorable warm-season perennial grasses. (1985 Kansas State Cattleman’s Day annual report)

In 2004 this department resource was refocused and named the K-State Beef Stocker Unit. In 2005, the unit completed the construction of 24 receiving pens designed to hold 300 head of 500 lb. cattle. In 2015, an additional eight pens were constructed and in 2020, another 8 pens were added. This new facility has allowed the unit to conduct research on receiving cattle and continue research on animal identification technology. The unit is host to several groups each year including students, youth organizations and producers. It is also home to the annual Beef Stocker Field Day held every September. The facility has thus provided an exciting forum to showcase research and provide educational opportunities.

The Kansas State University Beef Stocker Unit is focused on providing high-quality beef research to the state of Kansas and the nation. This is achieved by providing timely research to producers, regarding the latest industry information and advancements on the production and marketing of stocker cattle. The goal is to provide producers with cost effective results and the public with a safe product.